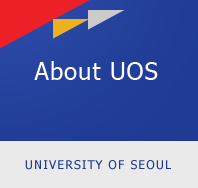 Of Seoul and For Seoul

The University of Seoul is a public university funded and supported by the Seoul Metropolitan Government. Seoul is the economic, political, and cultural center of Korea. It is also the 600-year capital of Korea, a historical city with social, cultural, and physical layers spread out along a vast and complex landscape. The character of the university the faculty, academic programs, and research institutions is shaped by Seoul’s metropolitan dynamic. Its faculty, students, and administrative body are distinguished by a commitment to civic values and a dynamic urban civilization. Along with basic research, it functions as a think-tank in formulating and supporting the major policy goals of the Seoul Metropolitan Government. With diverse and specific programs that integrate research and policy, practice and education, the University of Seoul seeks a balance between academic and professional concerns, between visionary goals and practical research.

The University of Seoul has set the clear goal of becoming an international center for the urban sciences. These range from environmental and civic engineering, architecture, urban planning and landscape design to public law and administration, taxation science, economics, urban sociology and management. More recently, the university has diversified this base to include the arts and humanities. In the area of science and engineering, the university has concentrated on the development of information and media technology. With Korea’s largest and finest group of human and informational resources focused on the future of the world’s city, it boasts a unique array of research institutions working on the solutions to its problems and creative visions for its future.

Since 1997, the university has continued to receive major grants from the private sector as well as the Korean Ministry of Education and Human resources for its institutional goals. In 2005, the university was again selected for a grant of 5.5 million US $ and in 2006, the Woori Bank donated 10 million US $ to the university academic fund. At the national and global level, the university has formed strong alliances with industry, government, and research sectors. It sends more than sixty students a year for a fully funded one-month study tour of the strategic cities of the world.

The University of Seoul has its roots as an agricultural school first founded in 1918. In 1974, the school was re-established as a city university offering programs focused on disciplines that provide the knowledge-base of modern urban society. With the establishment of the College of Urban Sciences in 1996, its related programs and institutions have surged to the national and international forefront.
1918 Founded as Kyung Sung Public Agricultural College
1956 Upgraded to four-year college and renamed Seoul Agricultural College
1975 Oversight committee moved from the Seoul Board of Education to Seoul Metropolitan Government
1981 Renamed Seoul City University
1987 Upgraded to university status with 4 colleges and 22 departments
1996 Founded the College of Urban Sciences
1997 Renamed the University of Seoul

The student body consists of 7,500 undergraduate students and 2,500 graduate students. The faculty body consists of 350 full-time professors and 640 part-time lecturers and adjunct professors. The University of Seoul thus has one the best student-faculty ratios in Korea. The university is supported by an administrative staff body of 270 officials, most of whom are civil servants of the Seoul Metropolitan Government. For the fiscal year 2006, the University of Seoul commanded an annual budget of 100 million US $, of which 70 million US $ was provided by the Seoul Metropolitan Government. This amounts to one of the highest per-student educational investment ratios in Korea. The total annual budget amounts to 132.5million US $, which includes a UOS fund of 10.5m billion and a research budget of 22 million US $.

The University of Seoul has long been dedicated to providing services for healthy local government. In particular, it provides a diverse range of training programs for civil servants of the Seoul Metropolitan Government, high ranking government officials, and experts working in the public sector. In 1997, to provide the citizens of Seoul the opportunity to enjoy life-long education, the UOS set up an open university. Its branch in Kwanghwa-mun, located in central Seoul, provides a broad range of programs, including foreign languages, computers, Seoul studies, and cultural events. Its vocational courses help their enrollees get jobs and improve practical skills useful in everyday life. Every year the Center for Continuing Education provides continuing education programs for more than 5,000 citizens of Seoul. The University of Seoul operates the Social Welfare Center which provides a wide range of social services for the elderly, disabled, and underprivileged. It is estimated that every year more than 100 thousand people receive services provided by the Social Welfare Center.